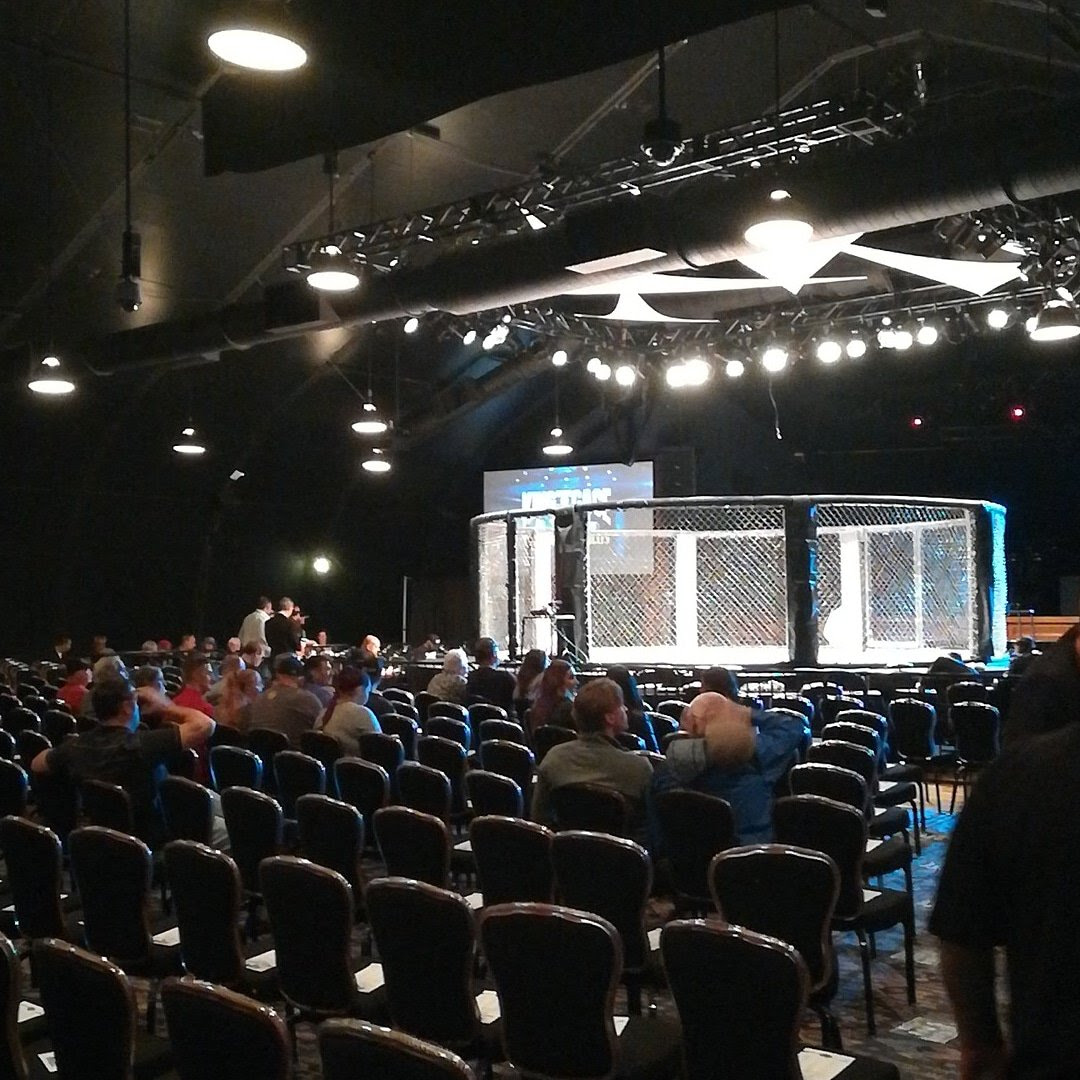 King of the Cage always brings it and Gold Country Casino has one of the best crowds I’ve ever been around. Whether it’s 4 or 400 people it’s just as loud and just as supportive.

This event will be broadcast in over 50 million U.S. households on MAVTV (214 DIRECTV, 810 Verizon FiOS). Check your local cable provider for cable station in your area.

We’re gonna do things a little differently this time and start things from the last match to the first.

This one was over quick, Santiago just wasn’t prepared for the speed and strength of Thomas Fallon. Fallon becomes your new Cruiserweight Champion in impressive fashion as he is very well accustomed to. In his post fight interview, Fallon says he plans on defending his championship at least once before he moves on. Fallon stated that he wanted to be tested and that he had to find tougher opponents to do so. Let’s hope he sticks around just a little bit longer in KOTC to deliver a few more stellar performances like this one. 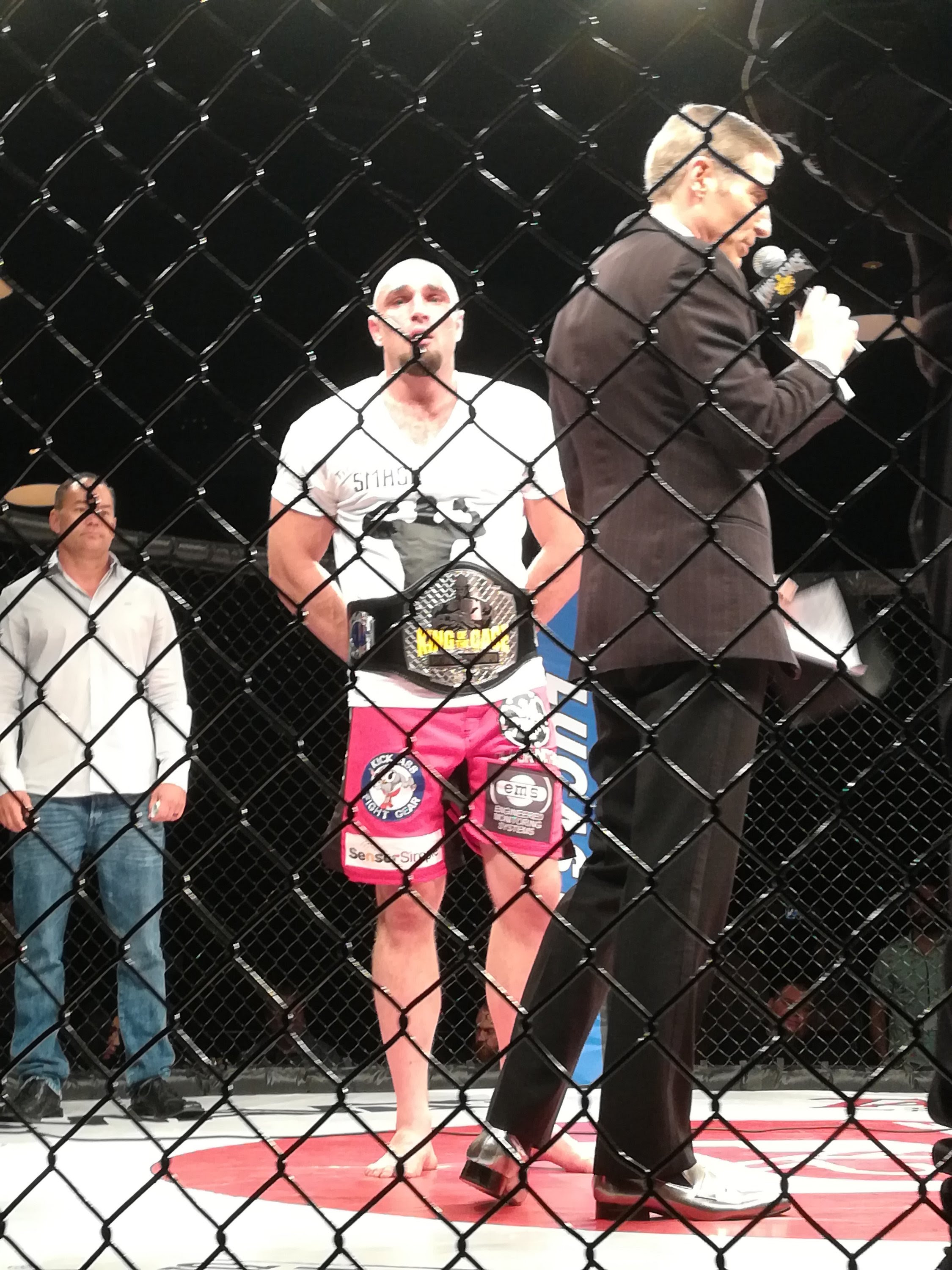 Turcios kept pressure on Paiva for the 1st round and never let up.

When a slow german suplex opens up the 2nd round you know you’re end for one hell of a fight! Turcios got Paiva’s back and nearly submitted him a couple of times. If you controlled the ground, you control the fight and that’s just what Ricky Turcios did to get an upset win over Josh Paiva. Paiva seemed entirely too confident in his record; your record doesn’t fight for you, you do. I’d like to see a rematch with a sense of urgency and hunger from Josh Paiva. 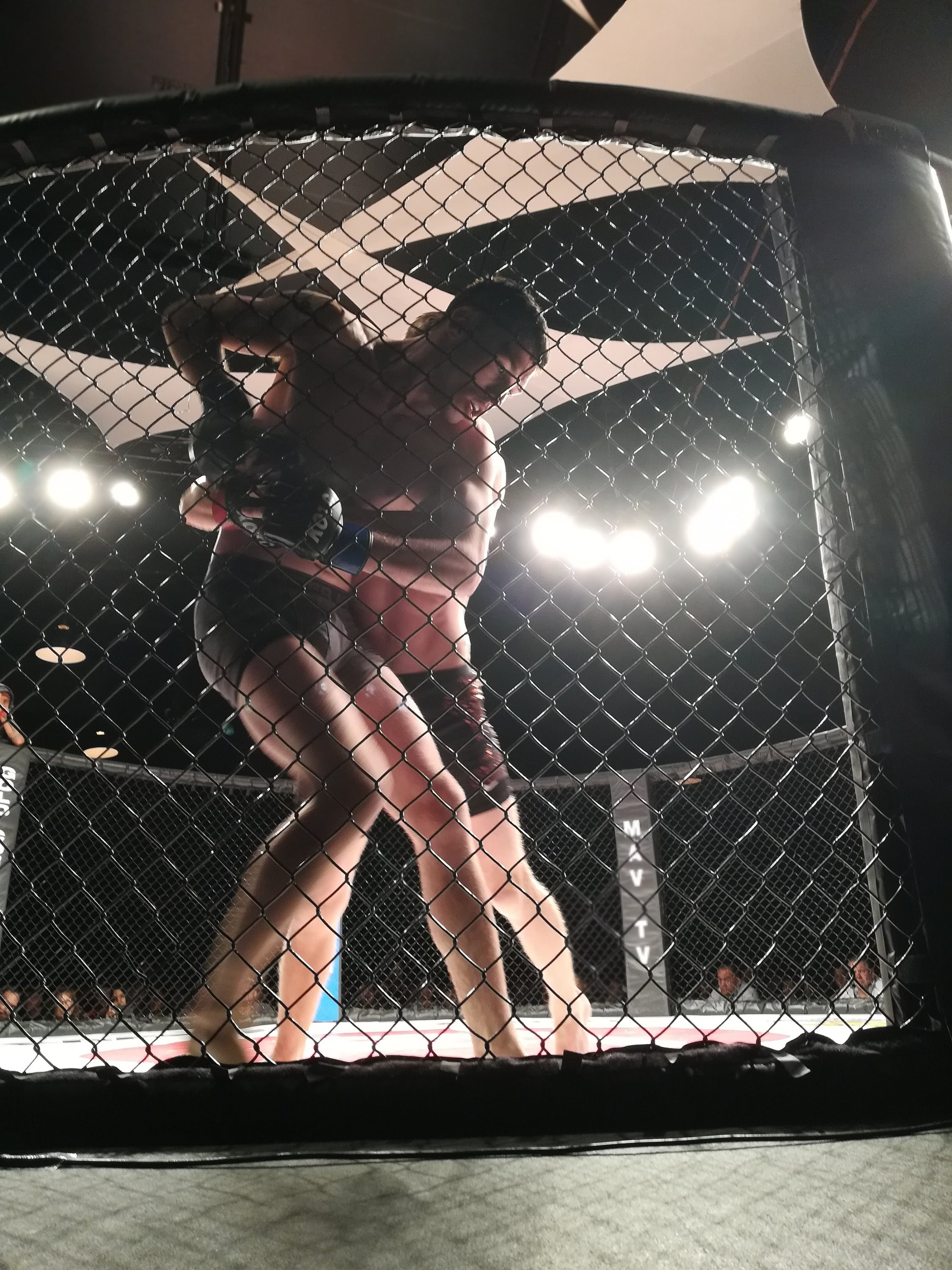 Gee controlled round 2 easily with much of the same but in the 3rd Gee elected to stand with Fields; Fields regained some confidence, taking the round This led to a BIG takedown in the 4th by Fields, with Curtis Fields nearly submitting Gee with a triangle!

Despite some slick escapes from Fields and a couple of solid rounds, Gee went home with the gold. Lake Gee put on a real show on his way to becoming the new Amateur Flyweight Champ.

Aaron Hedrick received one hell of a welcoming from the crowd as Oroville welcomed their own but Hedrick stumbled out of the blocks and shad literally jumped on the opportunity to put a standing guillotine on him. That’s unfortunate because this could have been one hell of a fight with the energy these guys were giving off. Shad Smith proved himself to be every bit the american badass he claimed to be.

23 seconds was all this one took to Nick Maximov to put away Nick Piecuch. A big couple of big shots dropped Piecuch but a nasty knee was the beginning of the end. Maximov fights out of Nick Diaz’s Academy so he’s in good hands. Not to mention his father Justin Maximov in his corner cheering him on.

Chris Wolf of the wolf pack was going into enemy territory; Brandon Waltz had a huge following in the crowd being from nearby Durham and coming from Team Alpha Male.

Wolf fell victim to a rear naked choke after a hell of a scramble halfway around the cage. The crowd was firmly behind their guy as he powered through to a quick victory.

Standalone MMA definitely had something to be proud of after Ryan Hamilton worked Lonnie Campbell from Bakersfield after a quick takedown. Hamilton took a few strikes however, they didn’t phase him as he remained confident in his takedown abilities. After a double leg takedown, the ground and pound made sure Chico’s own Ryan Hamilton sent Campbell back to Bakersfield with an L. 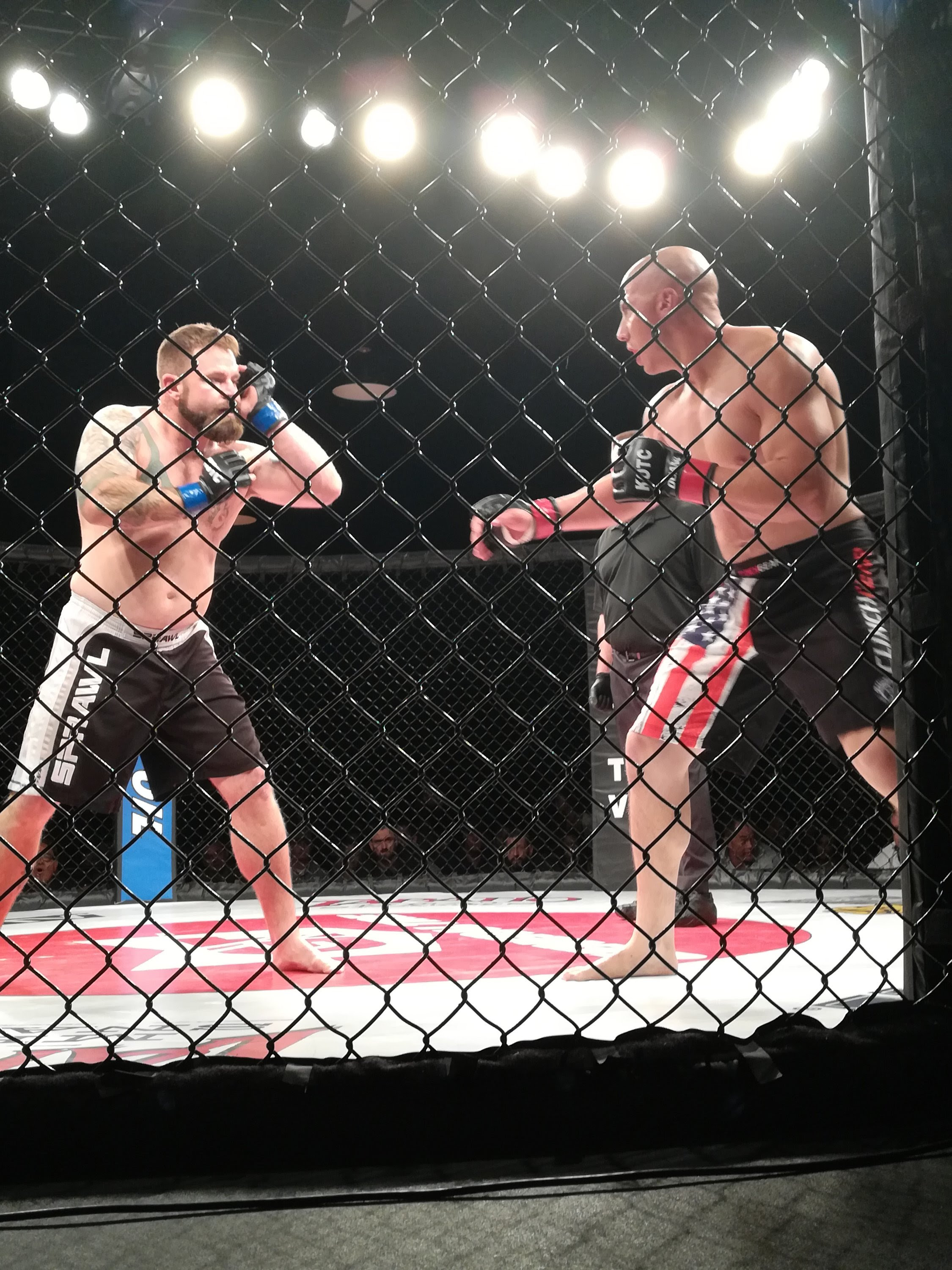 This catchweight bout at 195 lbs did not disappoint.

Modesto and Yuba City duked it out in a slobber knocker.

Stand and bang was the name of the game here. Nick Duncan ate some hard shots from Felipe Zavala and almost got put down a number of times in the first. Felipe Zavala remained ever so confident in his striking, keeping Duncan guessing; making Duncan work for whatever he got.

In the 2nd Duncan stayed aggressive and Zavala loaded up heavy on power shots showing great fatigue. Duncan needed a huge round and he got one as Zavala was pushed to that cage after the two exchanged shots that would shatter normal men.

Zalava went for the win while Duncan rested a bit more and seemed as if he was just trying to survive instead of giving everything he had.

It was a hard fought battle as Zavala defeated Duncan via split decision. Zalava was impressive for a newcomer; fighting out of a gym instead of a traditional MMA camp. Felipe Zalava’s corner men were just as new as he was, showing the same passion for MMA; can’t wait to see what Zalava does next.

The wolf pack claims a victory as Ben Monzon scored takedowns really early, then switching to ground and pound. Chandler Hall was forced to give up his back and the shots kept coming as the fight was stopped due to strikes.

Cody “The Punisher” Sons certainly lived up to his name as he dealt a hasty loss to Michael Martin. Sons showed off some impressive kicks for a heavyweight; nearly landing one that would have decapitated Martin. Cody Sons finally got some heavy shots in, making Martin tap while being punched.

Sons is going to be a tough match up for a lot of guys going forward, especially if he can land some of those dangerous head kicks he put on display.

Luke Barrington representing Oroville; Kyle Moya coming out of Reno. Cecil Peoples called the brief action that was this bout and it was brief.

Moya went for a takedown straight out of the gate and made quick and easy work of Barrington with a rear naked choke; sometimes life comes at you fast. The hometown hero didn’t get a W but he sure did gain some more fans and a ton of support.

What a weekend for MMA huh?

Special thanks to Jeff Michalec, Dean Stone and Brian Pritchard.

King of the Cage: No Escape, IN-PERSON REPORT

VOTE IN OUR LATEST POLLS